2019 Suzuki Jimny , the all new Affordable SUV by Suzuki is in Trend from few Months. This New Entry Level SUV is Expected to be Revealed Next Month . The Japanese automaker , Suzuki has Just Revealed the Next Generation Jimny Official Images.

Suzuki wasn’t planning to reveal any official images of the Jimny 2019 at this point, but after a set of unofficial images from a presentation were leaked on the internet last week, the company has now put these official renderings on its global website.

Now Looking at the Images , The 2019 Suzuki Jimny looks more youthful then before ,it gets boxy design and the squarish window, which gives it a similar impression like the Mercedes-Benz G-Class. At the front, the new generation Suzuki Jimny gets matte black finished five-slot grille , Round Shaped headlamps , Round Shaped Indicators Placed Near Headlamps , New Black Bumper and also the Round shaped Fog Lamps as well. 2019 Suzuki Jimny also gets New 15-inch or 16-inch five-spoke Black coloured alloy wheels which gives it a great side look. 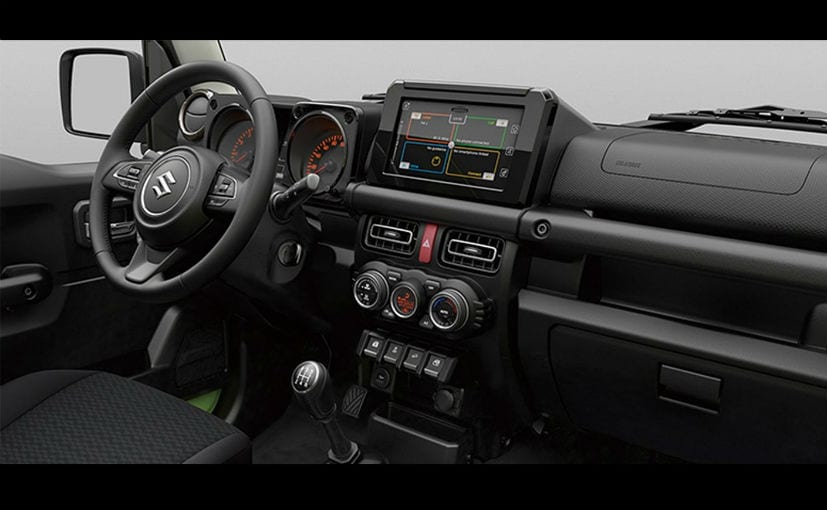 Coming to the Interiors , The 2019 Suzuki Jimny gets all new Interiors , by looking at the Pictures we found that , There is a 7-inch Tablet Like Infotainment System present in center console which also gets Apple Car Play , Android Auto , GPS Navigation etc. However we feel that it gets the Same system Available in Many Suzuki Cars like Baleno , Swift , Vitara Brezza etc Top Variant in India. The car looks much more Modern with this Interior it gets All black Finish , auto climate control, power window switches and much more. This Interior Looks much more similar to New Generation Swift , Jimny also Gets Same steering which is used in Swift and all Power Windows and other switches are same as of Swift.

Talking about the Chasis of Suzuki Jimny 2019 , The Next Gen Jimny is Based on ladder-on-frame Chasis which slightly increases its dimensions as it now measures 3,300 mm in length, 1,475 mm in width, and 1,715 mm in height, while wheelbase of the Car is 2,250 mm. The 2019 Suzuki Jimny will be offered in various colour options including option for dual tone as well .The 2019 Suzuki Jimny will be available in Medium Gray, Blueish Black Pearl, Jungle Green , Silky Silver Metallic, Spare White, Pure White Pearl, Kinetic Yellow (dual tone), Blyisque Blue Metallic (dual tone), Chiffon Ivory (dual tone).

Talking About Engine, the 2019 Suzuki Jimny will come with the 0.66-litre turbocharged, three-cylinder petrol engine, while the top-end vaiant of Jimny Sierra will get the 1.5-litre, naturally-aspirated 3-cylinder petrol engine. Both these engines will come mated to 5 Speed Manual Transmission and 4 Speed Auto. the 2019 Suzuki Jimny will also get a 4X4 Variant for Off-roading abilities.