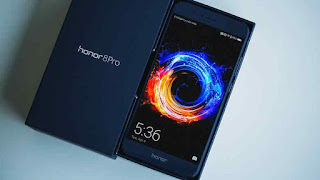 Today Huawei Showcased its latest flagship Smartphone Honor 8 Pro in India. However Pricing is not yet announced but Huawei reveals that the smartphone will be in affordable smartphone category.. The Honor 8 Pro packs many Highlights such as Dual Camera, 6GB RAM, 5.7 inches of Quad HD Display and a 4000mAh Battery.

Features and Specifications
Processor
Coming to the Processor, Honor 8 Pro is  powered by an Octa Core Kirin 960 chipset with HiSilicon Technology clocked at 2.4GHz (4 cores) and 1.8GHz (4 cores)  and the graphics will be handeled through Mali-G71 MP8 GPU.
Display
Honor 8 Pro comes with 5.7 inch Quad HD  IPS LCD Display with pixel density of ~515 PPI which is protected by an Corning Gorilla Glass 3.
Storage
Honor 8 Pro comes with 128GB internal storage which can be expanded upto 256GB via MicroSD Card.
Camera
Coming to the Camera, The smartphone comes with dual camera set up at the rear with 12MP+12MP Sensors with f/2.2 aperture with dual LED Flash and this camera can also records 4K Videos as well. Coming to the front Camera, the smartphone comes with 8MP camera with f/2.0 aperture with Full HD  video recording support.
Battery
Coming to the Battery Department , The smartphone comes with 4,000mAh battery which will give battery backup of one day easily.