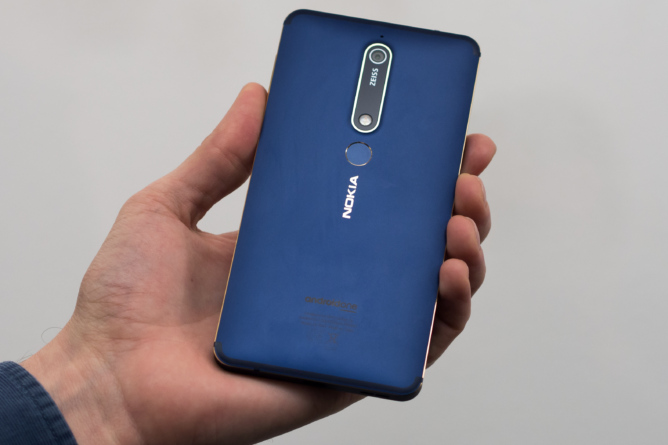 Nokia 6 2018 Specifications and Features : HMD Global has just launched the all new New Nokia 6 2018 in India Today with two more Flagship Smartphones Nokia 7 Plus and Nokia 8 Sirocco smartphone. The Newly Launched Nokia 6 2018 is an upgrade to last year’s Launched Nokia 6 . In terms of Hardware and cosmetic changes , there are very Few changes in the New Nokia 6.  The smartphone is powered by Snapdragon 630 chipset and runs Android Oreo out of the box with Android One Feature  which is Great.

The Nokia 6 (2018) was unveiled at MWC 2018 and it comes with a similar design as the earlier version. However, HMD Global has opted for on-screen navigation buttons and the bezels also look bit smaller, it also features comes with the older 16:9 display.

Coming to the specifications and Features Nokia 6 smartphone comes with a 5.5-inch Full HD Display with resolution of 1080×1920 pixels IPS LCD display which is also covered with Corning Gorilla Glass protection. It also gets a 16:9 aspect ratio display which was also there on Last Year launched Nokia 6. The new Nokia 6 runs on Android 8.0 Oreo out of the box and it also comes with Android One phone so it comes with the promise of new and latest software updates from Google.

Nokia 6 2018 smartphone features the old and same 16MP rear which was found on Previous Version of the  Smartphone. The Zeiss optics camera comes with PDAF, f/2.0 aperture, 1-micron pixels, and dual-tone LED flash. Now coming to the front Camera , On the front, the New Nokia 6 features an 8MP fixed focus camera with f/2.0 aperture, and 1.12-micron pixel. The device comes with the Bothie feature of the Nokia 8 as well.

Coming to the hardware of the smartphone, the New Nokia 6 runs on Qualcomm Snapdragon 630 processor which is coupled with Adreno 508 GPU. The smartphone comes only in one  variant which is 3GB RAM+32GB storage version in India. The storage can be expanded card up to 128GB via microSD.

Talking about Connectvity Features , As Connectivity options on the device includes Bluetooth 5.0, FM radio, 4G VoLTE, Wi-Fi 802.11ac,GPS / A-GPS, USB Type-C and a 3.5mm headphone jack.  Battery – It is powered by 3,000mAh battery which is promised to deliver up to 16 hours of talk time.

Nokia 6 is Available in Black/Copper and White/Copper color options, consumers can buy the new Nokia 6 starting April 6, 2018 from Nokia phones shop and leading mobile stores across the country including outlets like Big C, Sangeetha, Poorvika, Croma and Reliance. Customers on Airtel can enjoy a cashback of Rs 2000 on Nokia 6 and own the smartphone at an effective price of Rs. 14, 999 Airtel customers can also enjoy an extended free subscription to the Airtel TV app till December 31, 2018.

Additionally, consumers will get 25% instant discount on domestic hotels at MakeMyTrip. All new Nokia 6 consumers will also be eligible for a complimentary 12-month Accidental Damage Insurance by Servify on opening the Kotak 811 savings account and activating it. The new Nokia 6 will be available at zero cost EMI on credit cards and through Bajaj FinServ and Home Credit. ICICI bank will offer a 5% cashback till May 31, 2018.

How to Recharge FASTag Online via Bank | PayTM | PhonePe

Tata Sky Channel Selection guide: How to Add/Remove Packs in 2020

How to Generate FASTag Online- Recharge/Activate/Buy in 2020