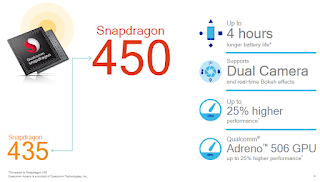 Qualcomm annouces a new entry to its Snapdragon 400 Smartphone Platform series- the Qualcomm Snapdragon 450. Qualcomm Incorporated which is the parent company of QTI, revealed this at the Mobile World Congress in Shanghai 2017.The brand new SoC is designed to deliver major improvements in CPU & graphics performances, battery efficiency, imaging and LTE connectivity as compared to previous chipset, the Snapdragon 435 which is the most powerful 400-series chipset currently.

The Snapdragon 450 is the first chip to use 14nm FinFET process in Snapdragon 400 series, that will be basically installed in upcoming mid-range smartphones and tablets. This change will bring more significant efficiency and boost in performance.

The octa core ARM Cortex A53 CPU is clocked at up to 1.8GHz in the new SD 450 compared to a max clock speed of 1.4GHz in the previous SD 435. This results in 25 percent increase in CPU performance compared to Snapdragon 435. The Snapdragon 450 is integrated with Qualcomm Adreno 506 GPU that will deliver a 25 percent increase in graphics performance over the Adreno 505 which was found on SD 435.

Qualcomm Snapdragon 450 process is promised to deliver up to four hours longer battery life compared to the previous generation SD 435. The new chipset will deliver up to 30 percent less power usage in gaming department. The Snapdragon 450 comes with Qualcomm Quick Charge 3.0 support as well.

Camera and Multimedia
Qualcomm Snapdragon 450 swill also feature real time Bokeh effects for better imaging performance. It is designed to have support of dual camera at 13+13MP, or single camera up to 21MP. The Snapdragon 450 will also record 1080p video recordings and video playback upto 60fps.

This new chipset will also support 1920×1200 full HD display with Qualcomm Hexagon 546 DSP, which will enable multimedia performances at high level and this is 5 times more efficient as compared to SD 435.

Connectivity and USB
It also comes with Qulcoom’s Snapdragon X9 LTE modem 2x20MHz carrier aggregation. Which means that it can be able to offer higher download speeds and upload speeds up to 300 Mbps and 150 Mbps respectively. The Snapdragon 450 will also support USB 3.0 which will enable you to tranfer data more fastly.
Snapdragon 450 comes with an major upgrade for the budget segment devices. According to the Qualcomm, the Snapdragon 450 is expected to be seen in devices by the end of this 2017.