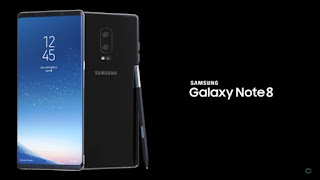 After the launch of Samsung Galaxy S8 , Samsung is preparing for its next launch event of its next flagship i.e Samsung Galaxy Note 8 , Note 8 is expected to be the most expensive smartphone by Samsung till the date. According to the leaks the smartphone is likely to be unvield in second half of september 2017.

Specifications and Features
Samsung Galaxy Note 8 is expected to feature same design like S8, but it will get 6.3 inch display instead of 6.2 inches offered in S8 Plus. The other main highlight about the device is dual camera, According to the rumours Note 8 will feature Dual Camera.The another great feature about this device is the edge-to-edge display and 18:5:9 aspect ratio same as S8 series.Samsung introducing a dual rear camera setup for first time in any device. The 12MP camera in Note 8 will be placed horizontally unlike the iPhone 7 Plus and OnePlus 5.The Samsung Galaxy Note 8 is going to be powered by Snapdragon 835 or Exynos 8895 SoC and 6GB RAM. Coming to the battery, the Note 8 is expected to come with a smaller 3,300mAh battery than the Galaxy S8+ which comes with a 3,500mAh battery capacity. Samsung Note series always comes with S Pen Feature and this one will also get s Pen Feature with much more improvements and features. Samsung Galaxy Note 8 is expected to more feature rich and company is doing their best in making this smartphone as Note 7 was the company’s biggest flop of all time so we are expecting much more from this Device.

Pricing
As we have cleared that Samsung Galaxy Note 8 is going to be most expensive device by the company because of its features and build quality, The Smartphone is expected to launch for €999 in Europe so we can expect that it will cost Rs.72,000 to Rs.75,000 in India. Samsung Galaxy Note 8 will be available in Black, Gold and Blue color shades at the launch.