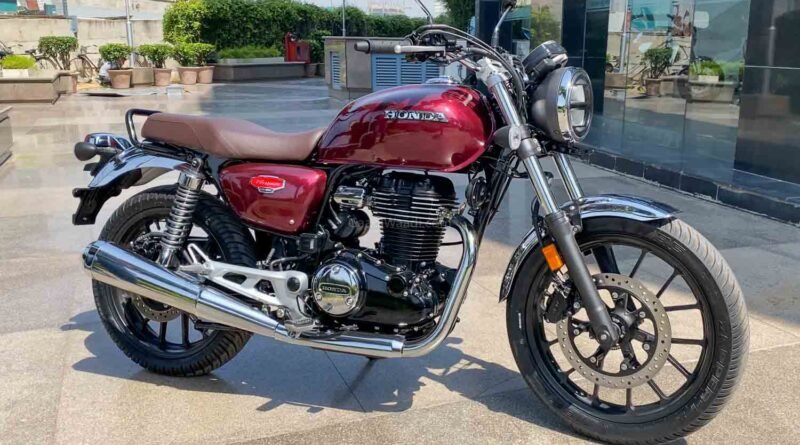 Honda has recently launched its new CB350 in the Indian market. This bike had been a topic of discussion for a long time and many people were waiting for its launch. Since its launch, it has created a lot of buzz in the market. It will compete with Royal Enfield Classic 350, Java 42, Benelli etc in the Indian Market. Honda Two Wheeler Company is quite confident about its new product, now it will be seen whether this bike makes a splash in this segment or not. In this post, we are going to give you complete information about Honda H’ness CB350 bike. Honda has named the bike as Highness. According to Honda, this bike will give you quite a royal premium feel with its classic retro look. This bike is very rich and it justifies its price to a great extent. 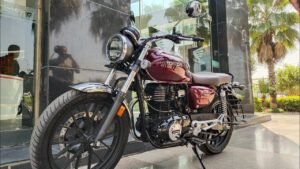 Talking about the design, it comes with a very good looking retro classic look which attracting many buyers. Although some people are also calling it a copy of the Royal Enfield Bullet. Upfront, it gets a Round Shaped LED headlamp along with round-shaped indicators on both sides which looks quite attractive. From the side, the first thing that will get your attention is its 19-inch alloy wheels that come with a black finish.

Another thing that will attract you is its metal exhaust which looks very premium in appearance but a little small in size. Apart from this, the top variant of CB350 comes with a matte finish on the tank while the lower variant gets glossy finish tank. The engine also gets a black finish which gives it a shiny effect in direct sunlight. Overall its old school classic retro design looks superb and it will attract a lot of buyers. 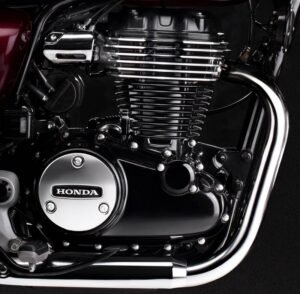 The Honda H’ness CB350 is powered by a 348cc single-cylinder air-cooled engine that produces a maximum power of 21PS and torque of 30Nm. There is a 5-speed transmission gearbox with easy shifts. On paper, this engine produces more power than its rivals, which results in a better pickup. As we all know, Honda is known for its ride quality, and the CB350 is not an exception. This bike offers impressive ride quality and vibrations are almost non-existent in this motorcycle. It will take around 13 seconds to accelerate from 0-100 kmph

Recommended: List of Electric Bikes and Scooters Available in India in 2020 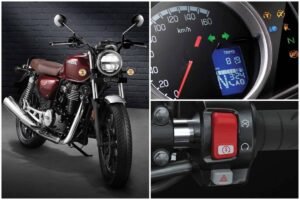 Coming to the Features, CB350 comes with several first in segment features. It gets an all-LED lighting system, Honda’s HSVCS (Honda Smartphone Voice Control System) to connect your smartphone to the vehicle through the Bluetooth, USB Type C Charger, Honda Selectable Torque Control (HSTC) to mitigate the rear wheel slip, HSTC (Honda Selectable Torque Control) to alleviate the rear-wheel slip. Apart from this it also gets hazard lamps, engine kill switch, slipper clutch and side-stand engine cut-off function for safety. The CB350 also features a semi-digital instrument cluster consists of an analogue speedometer and a small digital display which shows real-time mileage, gear indication, battery voltage and much more.  On the other hand, top of the line DLX Pro Variant features dual horns and HSVC System.

The Honda Highness CB350 is capable of delivering a mileage of 33–36 kmpl in the city and up to 40kmpl in highway conditions. It comes with a 15L petrol tank which is sufficient for short trips. You will also get a real-time mileage show in its digital cluster. For More details, you can also visit Honda Official Site. 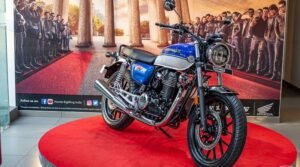 Honda has launched the Highness CB350 in two variants DLX and DLX Pro. The DLX Pro is the top variant equipped with all bells and whistles, including HSVCS (Honda Smartphone Voice Control System) technology. In addition, the Pro variant has a matte finish while the DLX variant gets glossy paint.

The CB350 comes with a total of 6 colour options. Three of which are single-tone schemes including Precious Red Metallic, Pearl Knight Star Black and Matte Marshall-Green Metallic colours which are limited to DLX variants only. While the DLX Pro variant has dual-tone colour options with Spear Silver Metallic with Pearl Knight Star Black, Athletic White with Athletic Blue Metallic and Matte Gray Black Metallic with Matte Steel Black Metallic. Honda has launched the HX CB350 at starting price of Rs 1.85 lakh (ex-showroom Delhi) for the DLX variant. While the DLX Pro variant starts at Rs 1.9 lakh (ex-showroom Delhi).