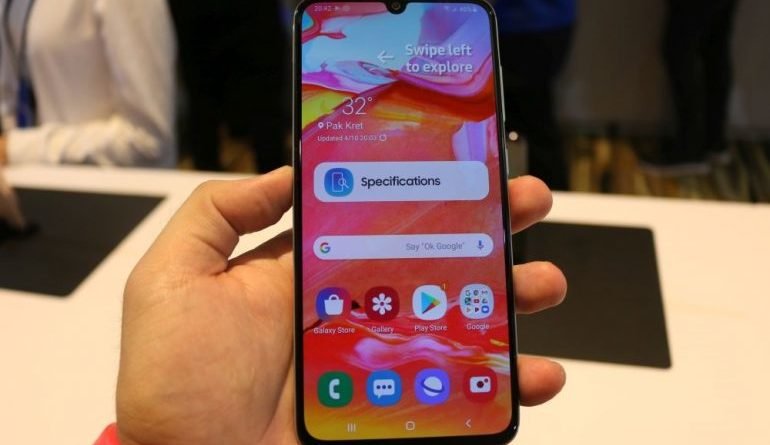 Samsung has launched its Next Mid-budget segment smartphone Samsung Galaxy A70 in India. After the launch of A20 and A50 , Galaxy A70 is the latest smartphone under Samsung’s A series. The main highlights of A70 are Snapdragon 675 , Triple rear Camera setup, 4500mAh battery and In-display fingerprint sensor. It offers great specifications and features at a value for money pricing. Coming to the ” Samsung Galaxy A70 Specifications and features ”

It sports a 6.7-inch Full HD+ Infinity-U Super AMOLED display with aspect ratio of 20:9 and resolution of 2400 X 1080 Pixels. The display also comes with in-display fingerprint sensor. The smartphone comes in only one variant which offers 6GB RAM and 128GB Internal Storage which can be further expanded upto 512GB via MicroSD card. The device is powered by Qualcomm Latest midrange Snapdragon 675 Chipset coupled with Adreno 612 GPU.

As far as Camera is concerned , ” Samsung Galaxy A70 Camera ” comes with Triple Rear Camera setup which includes a 32MP primary sensor with f/1.7 aperture + a 8MP 123° ultra-wide angle sensor with f/2.2 aperture and a 5MP depth sensor with f/2.2 aperture. Moreover, it gets a 32MP front camera with f/2.0 aperture.The samsung galaxy a70 is powered by a 4,500mAh battery whichh also supports 25W super fast charging. As far as price is concerned ” Samsung Galaxy A70 Price in India ” is Rs. 28,990. It will go on sale from May 1 onwards via Samsung Opera house, flipkart and offline retailers.

Samsung Galaxy A70 Specifications and Features