The South Korean manufacturer, LG has recently unveiled its New Smartphone LG Q52. The Smartphone is currently available in the South Korean Markets only. As the People of India are preferring branded and non-Chinese smartphones, LG might launch this smartphone in India as well. Also, the company has gained a huge hype by selling its G8X thinq Dual Screen Smartphone through Flipkart Billion Days for Rs 19,999 through only. It is the updated version of the Q51 and will compete with devices such as Moto Fusion +, Samsung Galaxy M31s, etc. in the Indian market. The main highlights of this newly launched smartphone are its quad rear camera setup with a 48MP primary shooter, 4,000mAh battery and 6.6-inch HD + hole-punch display.

Coming to the specs. It comes with a 6.6-inch HD + IPS LCD display with a resolution of 720 x 1600 pixels and a pixel density of 266 PPI. The display gets a punch-hole camera at the top. It has a simple design with a polycarbonate matte finish. The company has also given a side-mounted fingerprint reader and Google Assistant button in this device.

As far as performance is concerned, In Korea, it is powered by a 12nm Media Helio P35 chipset coupled with IMG PowerVR GE8320 GPU. For Storage, it packs 4GB of RAM and 64GB of internal storage. Users can also expand the storage of the device up to 2TB using Micro SD Card. The device will run on LG UX 9.1 based on Android 10 OS. 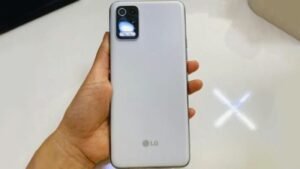 In terms of Camera. LG Q52 sports a quad-rear camera setup with a 48-megapixel Primary Sensor with an f/1.8 aperture, an 8MP wide-angle lens and a 2-megapixel Depth Camera and a 2MP Macro lens. The Rear Camera module also features Dual LED Flash. While at the front, it gets a 13MP Camera for taking Selfies.

So far, LG has announced LG Q52 in the South Korean market with a price tag of KRW 3,30,000 (Rs 21,300). It will be available in two colors Silky White and Silky Red Colors. The company has not shared any information regarding its India launch. In the Indian market, it will compete with smartphones such as Samsung Galaxy M31, Poco X3 etc. This can be a great smartphone for users who are looking for a reliable and Branded non-Chinese smartphone.