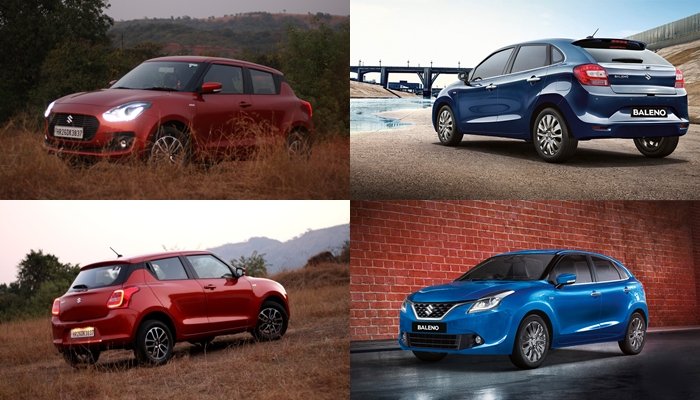 Now Coming to the Baleno. Maruti Suzuki Launched Baleno in 2016 and sells it through Premium Dealership called Nexa. Just After its launch Baleno creates Buzz in the Market and it becomes one of the Most Selling Cars in India right now with waiting Period of almost 4 months. The Reason Behind Baleno’s Success is its Space, Performance, Mileage, Design and NEXA Premium Service. Baleno was made to compete with Hyundai Elite i20 as Elite i20 was the First Premium Hatchback of India which passes the Compact Sedan segment as well.

As Baleno and Swift 2018 almost comes in the same segment and same manufacturer so many People are confused which one to Buy. If you are in the market and Looking to Buy New Car. And confused between Maruti Suzuki Swift 3rd Gen and Nexa Baleno then, this Post is For You. In this post we will be doing Comparison Between Maruti Suzuki Swift 2018 vs Baleno, so let’s get started:-

Both the Cars Maruti Suzuki Swift and Nexa Baleno comes with ABS, EBD and Dual Airbags as Standard But Swift offers Brake Assist as Well whereas Baleno doesn’t offer Brake Assist. As  2 Airbags, ABS and EBD are present in both the cars so safety-wise both the Cars are the same. There is not such a big difference in the safety of both Cars. If Safety is your priority then you can choose any cars among Swift and Baleno.

Engine and Performance: Swift Vs Baleno

Mileage Plays an important role in this Segment, especially for Maruti’s cars. Well, Maruti Suzuki Claims Mileage of 22 kmpl for New Swift 2018 Petrol variant and 28.4 kmpl for the diesel variant of the car. Whereas Company Claims 21.4 kmpl for Petrol Variant of Baleno and 27.3 km for the Diesel Variant. Well in a Real testing condition we found that Both the cars deliver the identical Mileage figures, there is hardly 1-1.5 Kmpl difference between both the cars as Swift is lighter than the Baleno.

Maruti Suzuki Swift 2018 vs Baleno Space: Coming to Space, In terms of Space Baleno, offers more than the Swift. As both, the cars are based on the same Platform but the measurements of the Baleno is higher in Number as compared to Swift. Baleno offers more Leg Room and More Spacious Cabin than the Swift. Seating three or 3 Person at the rear is not an issue in Baleno. But in Swift seating Three will be an issue as swift is not that wide car. If Space is your Priority then Baleno is the Car you should Buy. Suzuki Swift vs Baleno

Maruti Suzuki Swift 2018 vs Baleno: Both the Cars comes with Great Specifications and Features. Almost all the specifications and features are the same. Both Swift and Baleno come with Android Auto and Apple Car Play supported Infotainment system, LED Drls Projector Headlamps etc. The feature which is missing in Swift is Steering Telescopic adjustment. As swift comes with only Tilt Steering Adjustment whereas Baleno comes with Both Tilt and Telescopic or Reach Adjustment as well. Also From the Delta Variant of the Car Auto Climate control is offered in Baleno. Whereas Auto Climate control is Available from Z variants of Swift. Specifications and Features wise Baleno wins the Battle. As in Base Variants Baleno offers more features like electrically adjustable ORVM etc.

Maruti Suzuki Swift vs Baleno: Coming to the Conclusion. As both the cars are from the same manufacturer almost similar to each other. Both are Great Cars and offers Great Value for Money. You can go and buy any of these two Cars and you will not regret. However, we feel that Buying Baleno makes much more sense. As it is sold by Maruti Premium Dealership Network. And offers much Better Space and Features which makes it much better buy. Baleno also comes with RS Variant which offers great Driving Experience. Whereas Swift does not get any RS Variant as f Now. Also, the Automatic Variant of Baleno is based on Higher Technology than of Swift as Baleno gets CVT Transmission. Whereas Swift gets AGS Technology it’s Not that Great. Suzuki Swift vs Baleno.

Vivo sub-brand iQoo launched its first smartphone iQoo3 back in 2020 which comes with flagship specs at an affordable price.