Xiaomi has announced its new flagship Smartphone Concept Mi Mix Alpha at an event held in China. It is the First Smartphone to have “Surround Screen” due to which it looks like the smartphone entirely made up of Screen. Its predecessor (First-generation Mi Mix), was the first smartphone to get the notch-less display. And Now With the Coming trend of Fold Screen and Waterfall displays, Xiaomi has taken the Smartphone Displays to the Next level by Launching Surround Screen Display Smartphone. 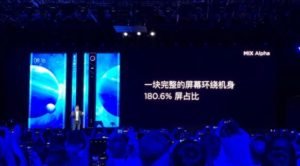 Coming to the specs and features. The Smartphones gets a Surround Screen Display which gets Full Display Which wraps the Device from front to rear and Meet at the Rear camera module. When it comes to measurement of Screen, it is a 7.92 Inches Flexible AMOLED Display with Resolution of 2088 X 2250 pixels. There are network status, battery level and other indications displayed on the Side of the screen for Quick notifications

As far as performance is concerned, Mi Mix Alpha is powered by Snapdragon 855+ SoC coupled with Adreno 640 GPU. In terms of Storage, it gets up to 12GB RAM and 512GB Internal Storage. The Smartphone will run on Android 10 with MIUI 11 out of the box.

Talking About the Camera Department. The Camera is one of the main highlights of Mi Mix Alpha. It uses triple Camera setup with a primary Samsung’s 108-megapixel camera sensor which gets 2×2 square Combined Pixel for better low light images with f/1.7 aperture and 0.8µm of Pixel size. A 12 MP telephoto lens with  f/2.0 aperture and pixel size of 1.4µm and 2x optical zoom. And a 20MP sensor with f/2.2 aperture and pixel size of 1.0µm. For the Selfies it uses the Same Camera Module.

Xiaomi has announced Mi Mix Alpha as the Concept phone and it isn’t going to mass production any time soon. the device will go on sale in December 2019 in China. According to the Company, the smartphone will cost around $2,800. As far as India launch is concerned, It is expected to happen in 1 Quarter of 2020.