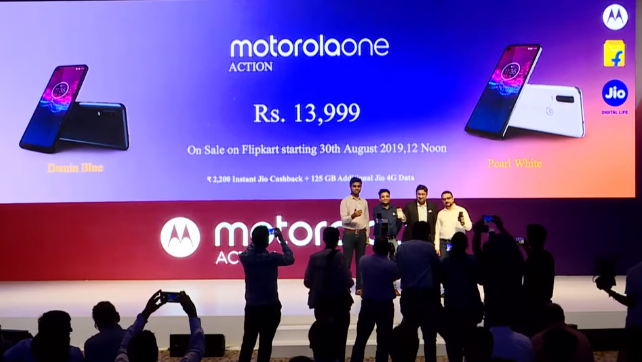 Moto has just Launched its new Mid-budget segment Smartphone Motorola One Action in India under its One Series at an event held in New Delhi. The smartphone offers great specifications and features at a value for money pricing. It carries the same specifications and features from its sibling Motorola One Vision except for the camera setup which makes it a different smartphone from One Vision.

The main highlight of One Action is its CinemaVision Display, Exynos Processor and triple Rear Camera Setup. It competes with Smartphones like Redmi K20, Samsung galaxy M40 etc Smartphones in India.

Motorola One Action Specifications and Features

Coming to the Specifications and Features, it comes with a 6.3-inch Full HD+ LCD Cinevision screen with Resolution of 2520 X 1080 pixels and aspect ratio of 21:9 aspect. In terms of design, it gets glass body and same design like its sibling Motorola One Vision.

As far as performance is concerned, it is powered by a 2.2 GHz Octa-Core Exynos 9609 Processor by Samsung coupled with 4GB RAM and 128GB Internal Storage. For graphics performance, it gets ARM Mali-G72 MP3 GPU. It runs on Android 9.0 Pie (Android One) out of the Box. 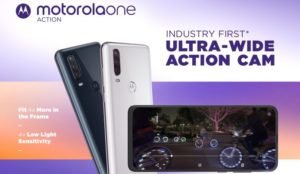 The smartphone is powered by a 3,500mAh battery which also gets Fast Charging support. As far as connectivity options are concerned it gets Dual-SIM, VoLTE, USB 2.0 Type-C; Wi-Fi a/b/g/n/ac, GPS + GLONASS, Bluetooth 5.0, NFC and 3.5mm Headphone Jack.

Motorola has launched One Action at Rs. 13,999 in India and will be available to purchase via Flipkart from August 30 onwards. It comes in two colour options Denim Blue and Pearl White. Motorola is offering cashback of Rs. 2,200 for Jio Users and 125GB additional data with the Smartphone.