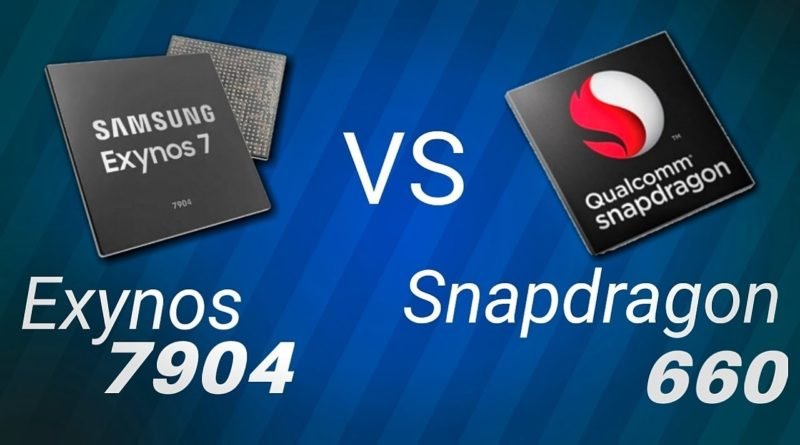 Well, we have already done the comparison review of Snapdragon 636 vs 660. Such that in this post we are going to tell you about Exynos 7904 vs Snapdragon 660 Comparison: Which is a better processor and overall best Performer.

The Exynos 7904 is newly launched mid-range processor by Samsung and other smartphone brands cannot use it in their products.  Whereas the Snapdragon 660 is the most commonly used processor by Smartphone manufacturers like Xiaomi, Realme etc. Both the chipsets are manufactured using 14nm Process and made on 64-bit architecture.

The Qualcomm Snapdragon 660 gets Qualcomm Quick Charge 4.0 which results in less charge time and better battery efficiency. Qualcomm also claims that it can give up to 5 hours of battery life merely charging the device for 5 minutes.

On the other hand, Exynos 7904 gets adaptive fast charging which is not as powerful as compared to Snapdragon 660 fast charging technology.

Coming to the performance. Performance is the major factor while comparing the chipsets as the overall results are based on performance. Both Snapdragon 660 and Exynos 7904  are fabricated using 14nm LPP FinFET process.

To increase the power efficiency manufacturers are going for smaller process nodes as most of the flagship chipsets like Snapdragon 855 and Apple A12 are based on the 7nm process. So we can say that both 660 and 7904 are not the latest chipsets and not that much power efficient because they are focused on the mid-range segment only. 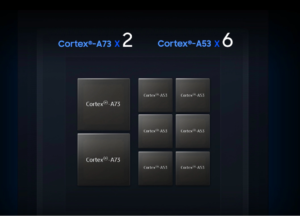 GPU: Coming to the Graphics Performance, Snapdragon 660 CPU is coupled with Adreno 512 GPU with Vulkan API. It is the Mid-range 14nm GPU running at a clock speed of 850MHz and while playing casual games, the user will not feel any frame drops at all.

The following table shows the AnTuTu Benchmark and Geekbench score. We have calculated the score using Mi A2 powered by Snapdragon 660 and Samsung Galaxy M20 powered by Exynos 7904. 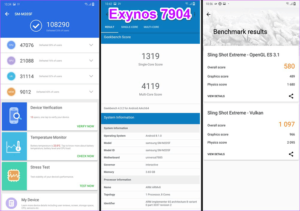 The camera plays an important role for some users. Samsung Android smartphones are known for its Camera. When it comes to Exynos 7904 vs Snapdragon 660 camera comparison, Exynos 7904 is better than Snapdragon 660.

Recommended: Snapdragon 632 vs 636 Comparison Review: Which is better

Now coming to the conclusion of Exynos 7904 vs Snapdragon 660 Comparison Review. Both the chipsets are mid-range specific. The Snapdragon 660 is available in many mid-range devices from Manufacturers like Xiaomi, Realme, Moto etc where Exynos is developed by Samsung and comes in Samsung M series only.

The overall performance of Snapdragon 660 in terms of CPU and GPU is far better than Exynos 7904. And looking at AnTuTu and Geekbench scores again Snapdragon 660 performs better. The point where SD660 lacks is in the camera department.

As Samsung is known for its camera and Exynos 7904 also supports triple camera which makes it a clear winner in terms of the camera only. Also, the Camera performance depends upon the device to devise hardware.

2 thoughts on “Exynos 7904 vs Snapdragon 660 Comparison Review : Which is better”