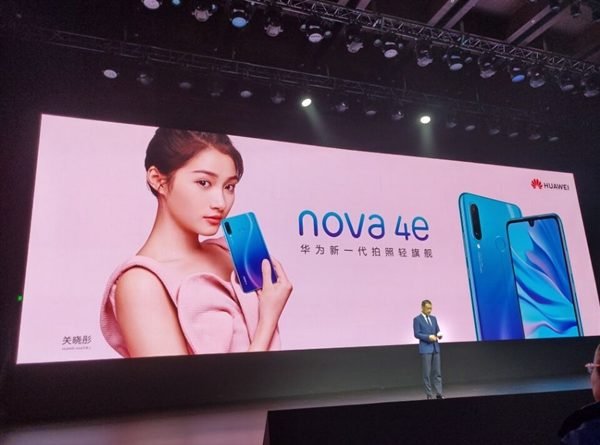 Huawei has launched its New Mid-budget segment smartphone Huawei Nova 4e in Malaysia. The smartphone comes with great specifications and features at a great pricing. However the smartphone will be available in huawei domestic market only and later on it will launch globally. The main highlight of the smartphone is Triple Rear Camera , 32MP selfie camera and Haisilicon Kirin 710 processor.

The smartphone comes with a 6.15 inches of full-HD + IPS LCD Display with resolution of 1080×2312 pixels.  The pixel density of its display is 415 ppi. Coming to the Performance , Huawei Novs 4e is powered by  Haisilicon Kirin 710 processor coupled with Upto 6GB RAM options. The smarphone runs on EMUI 9.0.1 based on Android 9 Pie out of the box. It comes in two variants with 4GB RAM and 6GB RAM. Both the variants get 128GB Internal storage which can be expanded upto 512GB via Micro-SD card. The device is powered by 3,340mAh battery.

Talking about camera , Nova 4e comes with triple rear camera setup. t th rear there is a 24MP Primary camera sensor with F / 1.8 aperture which is a wide angle lens. And a 8MP secondary sensor with ultra-wide angle lens and a  2MP depth sensor. At the front there is a 32MP Front Facing Camera with F / 2.0 aperture for taking great selfies.