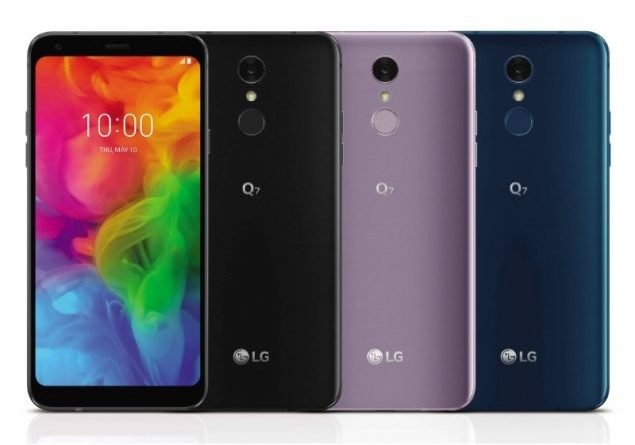 LG Q7 : LG has launched its New Mid-Budget Segment Smartphone in India , the LG Q7. The q7 is the latest smartphone launched by LG in its Q series Line-up. The device comes in Under Rs. 20,000 segment and offers decent specs and Features. The main highlight of LG Q7 are 5.5 inch Full HD Display , Wter-Dust Resistant , Military level durability and MediaTek MT67055. LG Q7 is priced at Rs 15,990 in India and it comes in just one variant which offers 3GB RAM and 32GB Internal Storage. The smartphone comes in two colors options Aurora Black and Moroccan Blue. The device will be available across India from September 1st onwards from Online and offline stores.

LG Q7 comes with a 5.5 inches of FHD+ Full Vision Display with resolution of 2160 x 1080 and Pixel Density of 442 PPI with 18:9 Aspect Ratio. The smartphone is powered by an octa-core MediaTek MT6705S processor coupled with Mali T860 GPU. The device launched in one variant which offers 3GB RAM and 32GB Internal Storage which can be expanded upto 2TB via MicroSD card. Coming to the camera , the q7 comes with a single 13MP sensor which LED flash and PDAF. The front facing camera is a 8MP shooter with selfie mode for taking great selfies. The device The device is water and dust resistant with IP68 certification and MIL-STD certification which results in military-level durability. The LG Q7 runs on Android 8.1 Oreo with the LG UX interface out of the Box. Connectivity features in the smartphone includes 4G VoLTE, Bluetooth  4.2, 3.5mm Headphone Jack, FM radio, DTSX 3D surround and USB Type C port. As far as Battery is concerned , the Q7 is powered by 3,000Ah Non-Removable Battery. The Q7 will compete with Nokia 6.1 Plus , Redmi Note 5 pro and Honor Play etc smartphones in India.