Realme is all set to launch its first 5G smartphone Realme X50 5G in China on 7 January 2020. The company has officially teased the device on its social handle which reveals some of its specifications and features along with the design.

The Realme X50 5G is expected to be powered by Qualcomm’s latest octa-core Snapdragon 735 processor paired with 6GB of RAM. According to leaks and Rumours, it will get Quad Camera Setup at the rear and dual front camera setup at the front.

The device is rumoured to support wireless charging and VOOC fast charging technology. In terms of design, it will get a glass back body and dual punch-hole display. It will compete with the upcoming Redmi K30 5G in India. 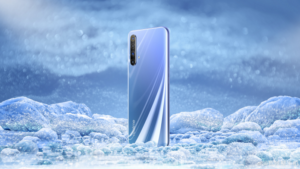 The Upcoming Realme X50 5G is expected to come with a 6.67-inch display. With a resolution of 1080 x 2400 pixels. It will be a Super AMOLED Punch Hole Display with Dual Front camera embedded in it.

Coming to the performance, the smartphone will be powered by Qualcomm’s Latest Snapdragon 765G Octa-Core Processor. Coupled with Adreno 620 GPU. And 6GB of RAM. The main highlight of this chipset is its performance and built-in 5G modem with dual 5G mode. The Dual 5G mode enables both NSA and SA 5G networks resulting in much broader coverage and better connectivity.

The Realme X50 5G will Run on ColorOS 7 based on Android 9.0 Pie out of the box. In terms of Storage, it will get up to 128GB Internal Storage option. As far as the battery is concerned, it will be powered by 4,500mAh non-removable battery which will also support VOOC Fast Charging as well as Wireless Charging feature.

Realme X50 5G will be launched on 7 January 2020 in China. After launching the device in China, the Company will launch the X50 Smartphone in the Indian market As we all know that Realme launches its devices in India very quickly, we can expect that Realme X50 will be launched in India in mid-January 2020. As far as price is concerned it is expected to Price between Rs. 17,000 to Rs. 20,000 in India.