Updated [25 June 2020]: After starting production of the 5th-gen 2020 City sedan at the Greater Noida plant on Wednesday. Honda has now started accepting pre-booking of the car before its launch. Users can e-book the Vehicle by visiting the Honda From Home Online website by paying a token amount of Rs 5,000. The 5th Generation Honda City will be launched in India in July 2020.

Honda City has always remained a popular car. There are many fans of this vehicle in India just because of its high-performance petrol engine. This is the same car that made the Honda brand popular in the Indian market. Honda has so far launched 4 Generations of City in India and all four have achieved great success. A few months ago, the company showcased its 5th generation Honda City 2020 model in Thailand.

The 5th generation of the Honda City was in the leaks for months. Many times it was also seen testing on Indian roads. For your information, we would like to include that Honda was going to launch the new Honda City 2020 in the Indian market on 15 March 2020, which the company had postponed due to Coronavirus. Although its new launching date has not been announced yet. Before its official launch, the new Honda City brochure has been leaked online, revealing information related to its features. 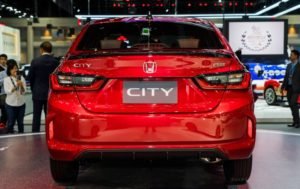 Safety remains the priority for most of the buyers. So, starting with safety. The Honda City top variant ZX will feature a total of 6 airbags, ABS with EBD, traction control, reverse camera, tire pressure monitoring system, rear parking sensors, agile handling assist with electronic stability program (Segment 1st), Hill Start Assist and Honda Lane Watch System (Segment 1st) which we have already seen in Honda Civic. In addition to this, it will also get 3-point seat belts for Rear Middle Seat. Honda will also introduce Connect Technology along with Alexa Artificial Intelligence which will operate via mobile. Apart from this. 2020 City will also get a new semi-digital instrument cluster which will include an analog speedometer along with the 7-inch display.

The Instrument cluster will also feature  “G-meter”. (Which indicates the direction and magnitude of the acceleration). The next-generation Honda City will be slightly longer and wider as compared to the current model.

2020 Honda City will get the same BS6 1.5-litre petrol engine as its current model. Recently, Honda has stopped selling its 1.5-litre diesel engines in the current City model. But with the introduction of the new model, this fuel-efficient motor will start selling again. It is expected that this time Honda will also offer the option of CVT automatic gearbox along with manual gearbox in its diesel engine. Earlier only Honda petrol engines came with CVT.

The new Honda City is expected to be priced between Rs 10 lakh and Rs 15 lakh (Ex-showroom Delhi). It will be launched soon after the lockdown is removed in India. It will compete directly against the recently launched Hyundai Verna facelift and Nexa Ciaz in Indian Market.